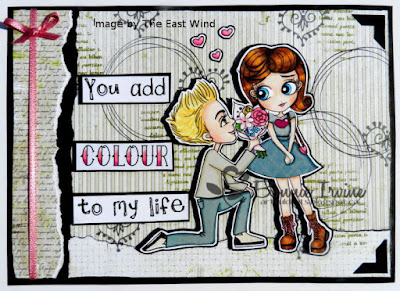 Hi everyone! It's mid August and this summer can end any time for me. I usually like summer but it has been way too hot and humid forcing me to stay cooped up inside with the air on so as not to aggravate breathing problems. I'm looking forward to a little cooler weather where I can go out and play :) OK...enough whining! We have a new challenge today at The East Wind and our theme is Paper Piecing, something I don't do very often but I love the effect. 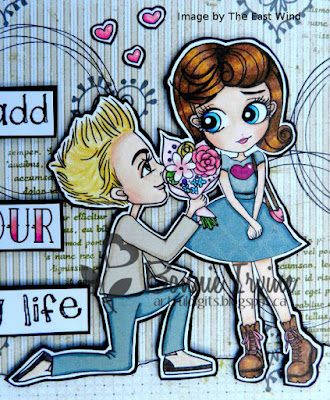 I decided to feature this sweet image called Aurora Young Love and paper pieced the clothes. I printed the image on white cardstock and coloured the faces, hair, skin, and shoes with Prismacolor and Polychromos pencils. I then printed the clothes again on four different sections of designer paper although the prints are subtle. That was my choice because of the sentiment I wanted to use...everything monochromatic and neutral. The clothing items were adhered to the coloured image and then more coloured pencils were used to add shading to them. The image was then fussy cut leaving a narrow white border and matted with black. The sweethearts were then popped up on foam tape. 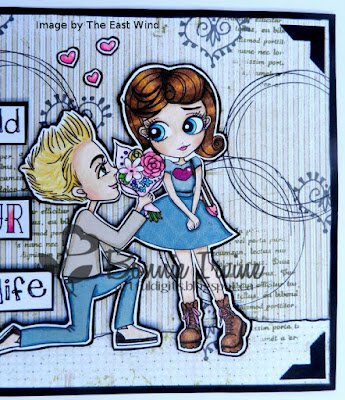 The background began with a  white 6 x 8 inch rectangle of cardstock onto which striped designer paper was adhered. A piece of dotted grid paper was torn and layered across the bottom of the striped paper to form the ground where the sweethearts will stand...or kneel.Text stamping and hearts were added with Watering Can Archival Ink and a scribbly circle stamp added with Jet Black Archival Ink. A strip of text designer paper was adhered to the left side of the background and a torn piece of black cardstock was tucked under it to help it show better. 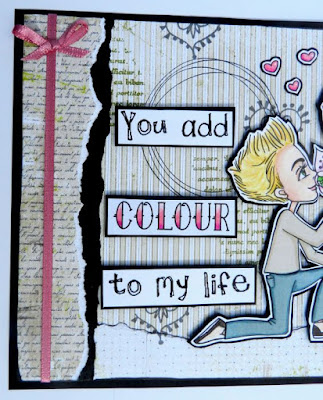 The sentiment was computer generated and Prismacolor pencils were used to add pink to the word colour to tie in with the pink in the image. To add a third repetition of that pink, a length of narrow pink ribbon was used to overlap the text paper and a wee bow was added over that. Two black punched photo corners were adhered to the right corners to add balance. The final touches were to add Black Big Brush Pen around the edges of the background and a black cardstock mat was used to frame the page.

Thanks for popping by today. Aurora and her friend are a little preoccupied but I sure appreciate it :) To see what my talented Blog DT mates created for this Paper Piecing Challenge, be sure to pop by The East Wind blog. Awesome projects from everyone! We would love to have you play along with us.