It Takes All Kinds - inspired by Bloofou Stamps 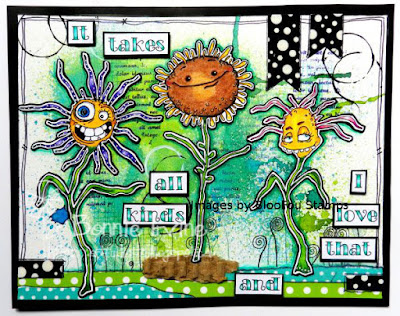 Hi everyone. I was delighted to learn that Lisa Graham, the artist behind Bloobel Stamps, was going to open 2 more Etsy Shops carrying different styles of her artwork. One shop is called Bloochou Stamps and features big eyed sweeties who melt my heart. The other shop is called Bloofou Stamps and features images that are a little edgier, a little more out there but still reflect Lisa's wonderful imagination, talent, and humour. I decided to create an art journal page featuring three of the Bloofou images. 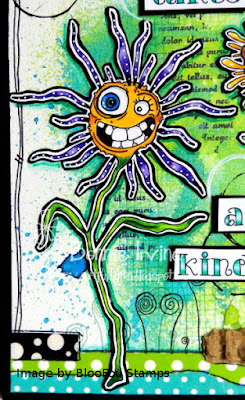 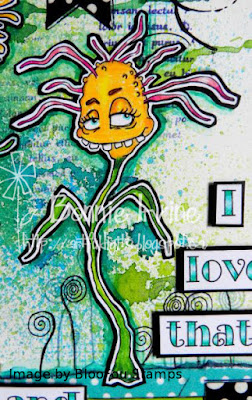 I love these crazy flowers. They are called: Ditzy Daisy (left); Sunflower (right); Pretty Flower (below center). All three were coloured with a mix of Prismacolor and Polychromos pencils and then fussy cut, leaving a narrow white border. They were then matted with black cardstock to help them show up against the mixed media background. 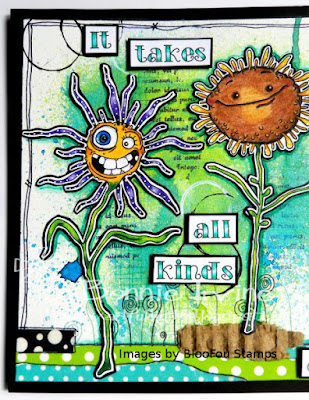 The 6 x 8 inch mixed media paper background was spritzed with Drop dead Gorgeous Green, Delphinium Turquoise, and Tibetan Poppy Teal Lindy's Starburst Sprays. Water was not added as I wanted the colours to be distinct and not blended. Forget-Me-Not Archival ink was applied to a woven background stamp and rolled onto the background once the sprays dried. Deep Purple Archival Ink was applied to Joggles Latin Nonsense stamp and it was also rolled on in places. Torn or cut strips of washi tape applied to white cardstock were adhered to the bottom of the page to form the ground. Stampotique's Swirl Stalks was inked with Viridian Green and again with Jet Black Archival Inks and stamped above the washi ground. A scratch paper was used to mask the ground so that the stamp could come right up to it without going onto it. 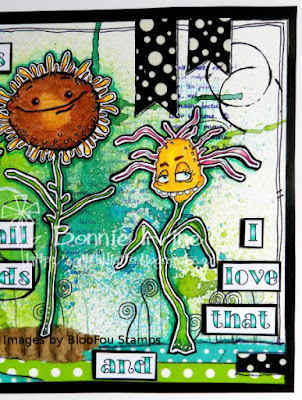 The three flowers were adhered to the background. because I wanted the center one to be taller than the others, a scrap of corrugated cardboard was layered over the ground at that point. Deep Teal Inktense pencil was added around the images and spread with a water brush to create shadow. Black Marble and White Linen Dylusions Paints were used to add two sizes of rings in three areas. Two flags cut from shiny tape applied to white cardstock were added to the top right corner. Small leftover pieces were also added to each side of the ground to create a little contrast and pop. The sentiment was printed onto white cardstock, trimmed and matted with black. The open spaces of the font were coloured with pencils, A simple border and outlining were done with a black pen and the edges were inked with black Big Brush pen. A black cardstock mat was added to frame the page.

Thanks for joining my three amigos and me today. We are delighted that you did that! Be sure and pop by Lisa's Etsy shops to see the huge variety of wonderful and inspiring images she has created. Her imagination is quite amazing!

Life is good; so is art.
Bonnie
Posted by Bonnie Irvine at 18:42

SQUAWK! I love your three amigos! I'd like to see that as a poster for tolerance in the school systems - bet the kids would LOve it!
~ginny
RubberMAD