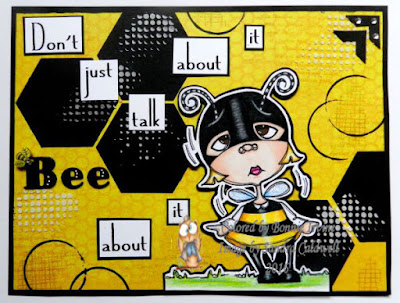 Monday's are exciting days at the Sandra Caldwell Stamp Fans Facebook group because the new releases come out. It's my turn to play with a brand new release from Sandra Caldwell's babycakes dnd Etsy shop. As soon as I saw this fabulous image called Bee Costume 463, I was smitten and knew she was the girl for me. I love bees andSandra's images so it was win/win for me. Is she not the most adorable bee? 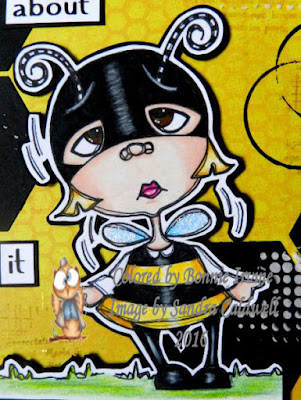 I coloured Bee with a mix of Prismacolor and Polychromos pencils adding some Diamond Stickles to her sweet wings. She was then fussy cut leaving a narrow white border, matted with black cardstock, and trimmed out again. Look at that heart melting face! Foam tape was added to the back of Bee to pop her up and create a natural shadow once she was attached to the background. 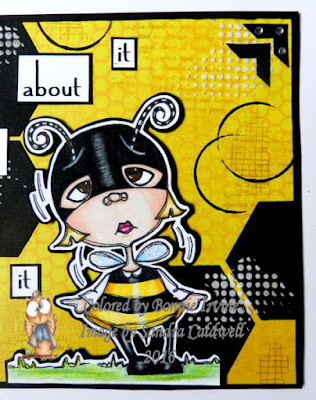 The background began as a 6 x 8 inch rectangle of hexagon printed yellow cardstock. A weave background stamp was rolled onto the paper in several places using Cofffee Archival ink. Black cardstock hexagons were die cut and adhered to the background. White Embossing Paste was scraped through TH Faded Dots Layering Stencil with a palette knife to add texture and dimension. Black rings were added by stamping with Black Marble Dylusions Paint and a bottle lid. 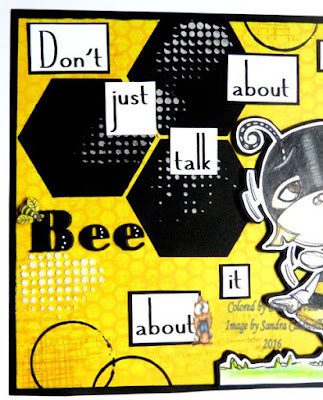 Most of the sentiment was printed from the computer onto white cardstock, trimmed close to each word, and matted with black. The word Bee was created with Idea-ology Ransom Alpha Parts. A bee button with a rhinestone head was adhered to the B with Glossy Accents and a small piece of foam tape was added to his little bee bum. Two punched photo corners were adhered to the top right corner and rhinestones to match the bee button's head were adhered to the top corner. This gives a visual triangle of sparkle with the button, the corner, and Bee's wings. Black Big Brush Pen was used to edge the outside of the page before it was adhered to a black mat.

Bee and I thank you for visiting today. To see the other fabulous new releases from Sandra, be sure and visit the Sandra Caldwell Stamp Fans Facebook group where my other talented teamies will be posting their fabulous projects created with the other new releases. Check Sandra's Etsy shop later in the day because they will be there as well. You don't want to miss out! They are awesome!