New Release - Sandra Caldwell's Who Can 890 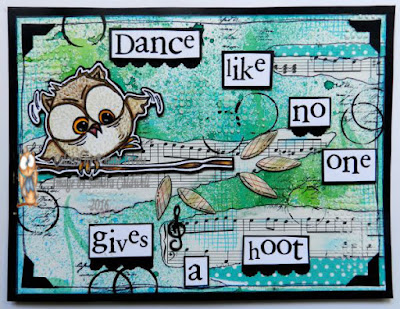 Hello again! Monday's are exciting days at Sandra Caldwell Stamp Fans Facebook Group because she releases many new images which the DT have had the privilege of playing with ahead of time. The images are uploaded to Sandra's Etsy shop, babycakesdnd, later in the day but we are so anxious to show you the new images that we post them in the morning. For today's release, I was able to create with the fabulous image called Who Can 890. I love owls and this one is cuter than cute! 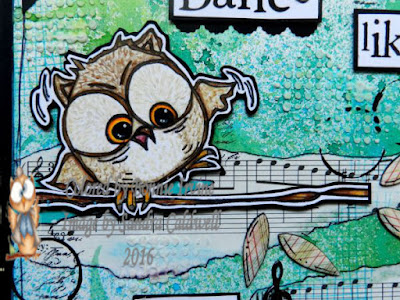 I coloured Who Can with a mix of Prismacolor and Polychromos pencils, using jagged choppy strokes to create the look of feathers. He and his branch were then fussy cut leaving a narrow white border all around the image. It was then matted with black cardstock and trimmed out again before foam tape was added to the back. 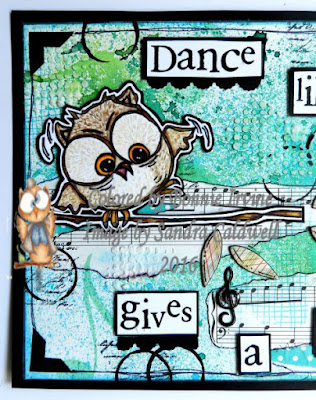 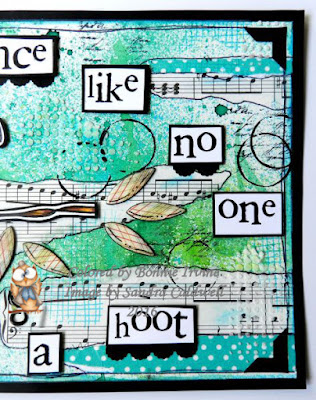 Black Dylusions Paint rings were added to the background using a bottle lid and then the image was glued in place.  Small chipboard leaves were added to the branch and then doodled on. A doodled border was added to the outside edges along with Black Big Brush Pen. Four photo corners were punched and adhered in the corners. The sentiment which had been printed on white cardstock was cut apart and matted with black cardstock. It was adhered to the page with foam tape and a scalloped border was added to every other word both to add more pops of black and to give the sentiment more visual weight.

Who Can and I thank you for popping by to visit today. be sure to stop by the Sandra Caldwell Stamp Fans Facebook group to see the other fabulous new releases and what my talented teamies did with them. Check out Sandra's Etsy shop as well. There are so many fabulous images there to inspire and delight you.

This is so cute! I love your bright colors. Quick question - why did you adhere the washi tape to yardstick first? Was it so the color and pattern of the tape show up better? Thank you for sharing your process.