The East Wind - New Release - It's My Box 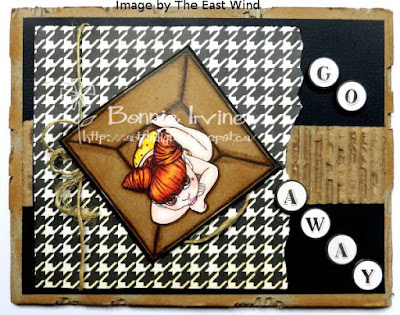 Hi everyone. It's Tuesday and that means it's New Release Day at The East Wind. We all loved this sweet image so you will see lots of samples of projects made with her on The East Wind Facebook group today. The image is called It's My Box and this little one reminds me so much of me when I was little. My dad used to warn me that if I kept up that pout  for too long, someone would surely come and sit on my lip thinking it was a couch. I was a masterful pouter! 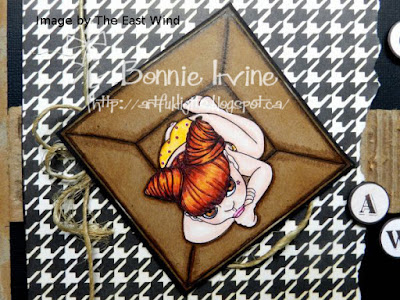 I printed this image twice: once on white cardstock to colour the little girl and  kraft cardstock to colour like a box. Both were coloured with a mix of Prismacolor and Polychromos pencils. She was fussy cut and then adhered over the kraft image. I wanted the kraft because it would give me a head start on making the box look more authentic. The box part of the image was also fussy cut and then mounted on black cardstock to make it stand out from the background. It was then popped up on foam tape to create dimension. 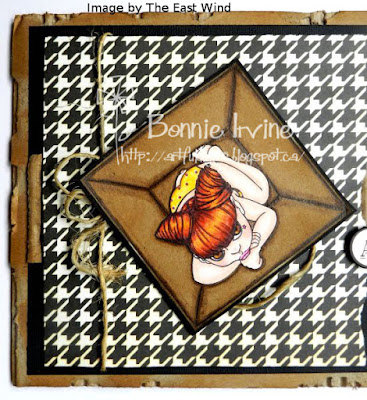 The background began as an 6.25 x 8.25 inch rectangle of black cardstock. A piece of corrugated cardboard with the top layer torn off was adhered horizontally across the center of the black base. A piece of black and cream herringbone patterned paper which reminded me of the black and white floors of the house I grew up in was cut smaller than the black and then torn at 5.75 inches to show the black background on the right side. Before  the herringbone paper was adhered to the black with foam tape, a length of twine was wrapped around it vertically and tied roughly in the center. The twine, which tied in to the cardboard carton theme, was left long because I wanted it to loop and curl above and below the image. 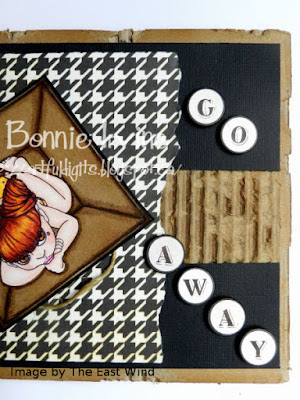 The sentiment was created with chipboard letters popped up on foam dots. In my mind, this little girl clearly wants the world to go away and leave her and her box alone :) To finish off the journal page and frame it, it was adhered to a thick piece of corrugated cardboard cut larger than the black. The edges of the cardboard were inked with Vintage Photo Distress Ink after they were distressed and torn a little to add more character and texture.

Thanks so much for joining my wee friend and me today. To see more of Unky's fabulous images, be sure and visit The East Wind Etsy shop where my friend will appear later today. And remember to stop by The East Wind Facebook group to see what my talented teamies created with this same image. We'd love to see what you create, too.

OMGawd - LOve it! The sentiment is perfect and I love your design & embellishments!
~ginny
RubberMAD