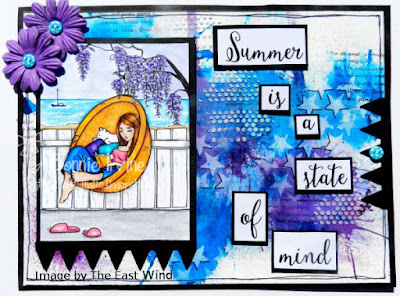 Hi there. Tuesdays and Fridays are New Release days at The East Wind and today, I was able to play with the new image called Wisteria. To me, this image combines everything I love about summer all in one scene. There is water, gorgeous flowers, a cat, and summer reading. Happy place! 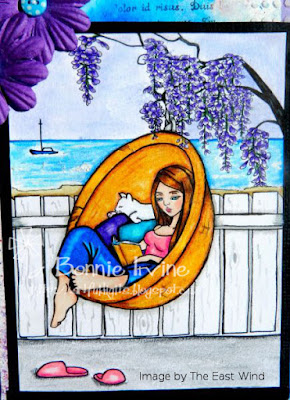 I coloured the image with a mix of Prismacolor and Polychromos pencils. I added white paint pen and a little Texture Paste for the white caps. The image has squared off edges so I cut along those and then matted it with black cardstock before it was popped up on foam tape. A die cut banner was added to the bottom edge to give the shape more interest. 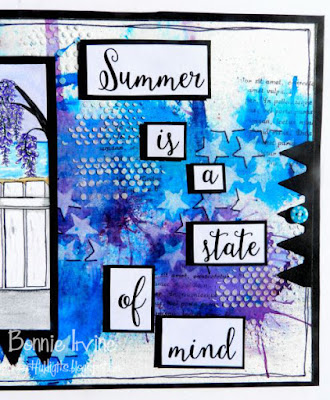 The background was created on a 6 x 8 inch rectangle of mixed media paper using Ultramarine and Purple Brushos. They were sprinkled onto the page and then activated with spritzes of water. Tipping the page in different directions as well as using the TH Spritzer Tool created the runs and drips. Once the Brushos were dry, white stars were stencilled onto the page with gesso through Joggles Punchinella Trio 2 stencil. White embossing paste was scraped through TCW's Tiny Circles stencil for added texture. Both the stars and the embossing paste pick up some of the Brusho colours which I love. Joggles Nonsense Latin Text stamp was applied to the background in a few places using Jet Black Archival Ink. 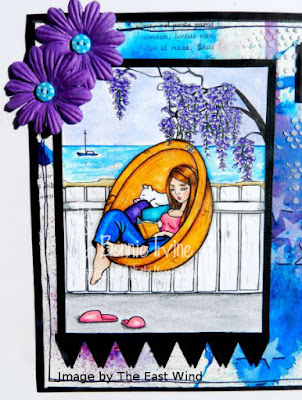 The image was adhered to the left side of the background and two purple silk flowers with turquoise dotty buttons were layered over that same corner. The other section of the die cut black banner was adhered to the right side of the background and a third turquoise dotty button was adhered to that to connect the two sides and add a third button. The sentiment was printed onto white cardstock and the words were cut apart. They were then matted with black cardstock and popped up on foam tape. A simple border and some outlining on the stars was done with a black pen. To finish off the piece, Black Big Brush Pen was used to edge the background before it was matted with black cardstock to frame it.

Thanks for joining me today. To see other wonderful creations with the Wisteria image by some of my TEW teamies, be sure and pop by The East Wind Facebook group  where they will be posted throughout the day. You can see this image and all of Unky's other awesome ones in her Etsy shop later today.