Talk to the Hand - A Bloobel Stamps image 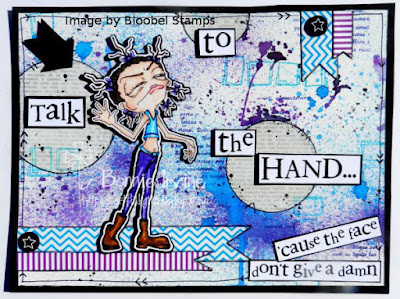 Hi everyone! Recently I stocked up on several of Lisa Graham's Bloobel Stamps and I can see by her new releases that I will be doing so again soon. Anyway, the hilarious image which I am featuring today in my art journal is one of them called Talk to the Hand. I love her attitude and how she celebrates her individuality...and also that this was my favourite expression back in the day :) She makes me laugh. 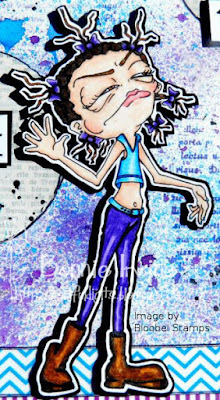 I coloured her with a mix of Prismacolor and Polychromos pencils. She was then fussy cut leaving a narrow white border and matted with black cardstock. Foam tape was added to the back of the image to create dimension and shadows. 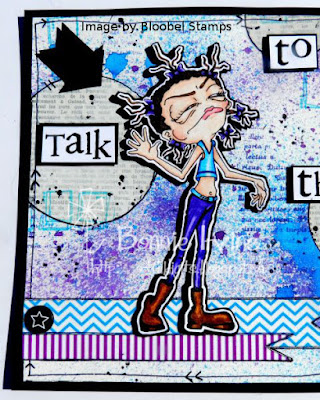 The background, a 6 x 8 inch rectangle of mixed media paper, was lightlu spritzed with Bachelor Button Blue and Witch's Potion Purple Lindy's Stamp Gang Starburst Sprays, tipping the background to create drips and runs. Stampotique's Dotted Squares stamp was applied with Forget Me Not Archival ink in several places and Joggles Nonsense Latin Text stamp was added with Deep Purple Archival ink. Three sizes of circles were punched from book text which was then muted with gesso before they were adhered to the background. Two different patterned washi tapes were cut into fishtail flags and added in two places. Small black disks with printed stars were used to accent them. 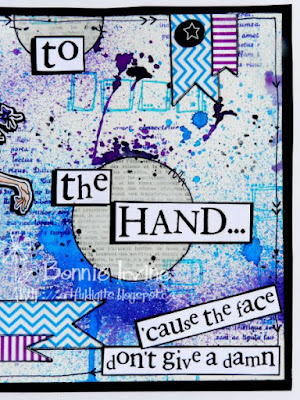 Thanks for popping by today. To see more of Lisa's fabulous images, be sure to check out her Bloobel Stamps shop. You can also see wonderful examples of how people feature them in their projects on the Bloobel Stamps Facebook group. We would love to see you post what you create on there, too.