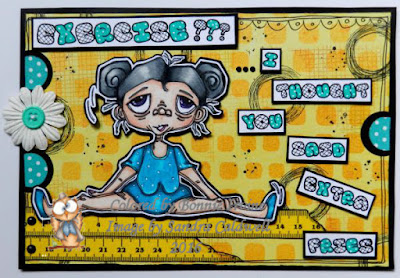 Hi everyone. It's New Release Monday at Sandra Caldwell's Etsy shop, Babycakes Digis and Designs. This week I was able to play with another Old Lady image and you know how much I love them. She is called Old Lady Splits (918)...not something I will be trying any time soon! At least, not on purpose :) 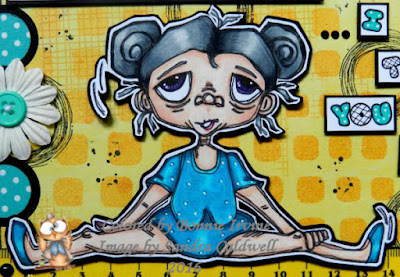 I coloured Old Lady Splits with a mix of Prismacolor and Polychromos pencils adding white paint pen dots to her leotard. She was then fussy cut leaving a narrow white border. Not only do I like the contrast but it also gives those skinny pieces like the strands of hair extra strength so they don't tear off when being handled. She was then adhered to a piece of black cardstock and trimmed out again leaving a narrow black border which creates a shadow effect. To create even more of a shadow, she was popped up on foam tape. 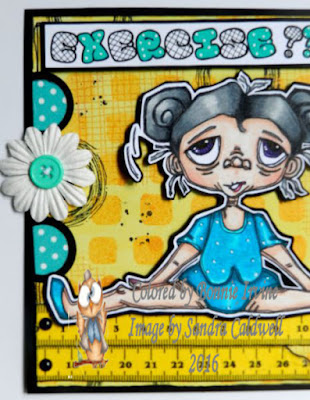 The background began as a plain yellow 6 x 8 inch rectangle of cardstock. I have so much designer paper and coloured cardstock that I continue to challenge myself to use it as a first layer for mixed media pieces from time to time. I spritzed Lindy's Stamp Gang Marigold Yellow-Orange and California Poppy Gold Starburst Sprays through Joggles Twaddle stencil, quickly lifting it off and transferring the ink still on the stencil to a blank journal page for another time. A rubber stamp with an image of woven cloth was added to the background in places using Pale Ochre Archival Ink. One of the Stampotique Circles Cube images was stamped in places using Jet Black Archival Ink. The same ink was used to stamp splatter dots. 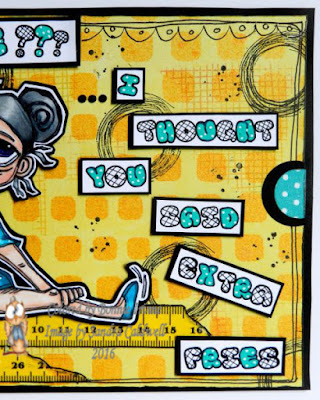 Before adding Old Lady to the background, two lengths of measuring tape washi tape were adhered to white cardstock, trimmed, and glued to the bottom of the background. This allowed Old Lady to be placed a little higher on the page without looking like she was floating. Two black enamel circles were added to the left end of the washi tape strips. Black cardstock semi circles were punched and placed along the sides. Turquoise dotted washi tape which matched her leotard was adhered to white cardstock and then punched into smaller semi circles to layer over the black ones. A white daisy with a turquoise button center was added over the middle half circle on the left side. The sentiment, which cracks me up, was printed from the computer onto white cardstock. Every other letter was coloured with turquoise gel pen and then dotted with white paint pen. The remaining letters were cross hatched using a fine black pen. The words were cut out individually, matted with black, and popped up on foam tape. Three half pearls were added as the dots between the two parts of the saying and a rub-on scalloped border was added to the top right edge. To complete the page, Black Big Brush Pen was used to edge the background . A simple border was doodled with black pen and the background was matted with black cardstock to create a contrasting frame.

Thank you for visiting today. Old Lady Splits and I appreciate that. When you get a chance, stop by the Sandra Caldwell Stamp Fans Facebook group where you will see the other new releases as well as the wonderful DT projects featuring them throughout today. Both the new images and the DT creations are awesome!