The East Wind Challenge #56 ~ Something Old, Something New 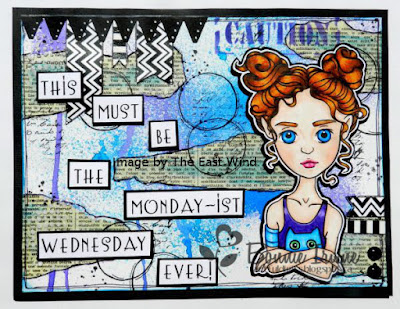 Hi everyone. It's the beginning of a new month and that means a new challenge at The East Wind. The theme this time is Something Old, Something New but instead of the usual wedding idea that goes with this saying, we are looking for you to use something old from your stash and also something that is new (or recent) to you. My something old is text paper from an old book as well as the bunting die which was one of the first ones I ever bought. The new were my Distress Crayons and a new (to me) Andy Skinner stencil. 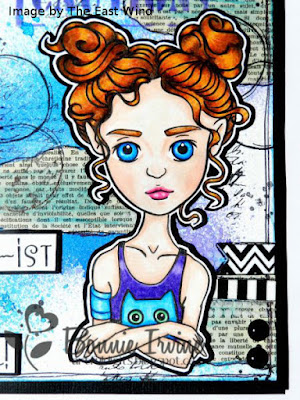 Because it's the first of the month, all of the blog DT are using the June freebie available to all subscribers of The East Wind newsletter.  The image is called Sassy Summer Fashion and I love both her expression and her beautiful face and hair. I coloured her with Prismacolor and Polychromos pencils and then fussy cut her leaving a narrow white border. She was then matted with black, trimmed out again, and popped up on foam tape. 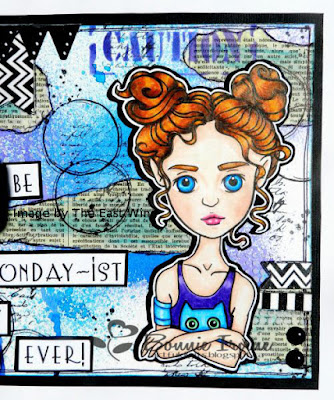 The background began as a 6 x 8 inch rectangle of mixed media paper which was spritzed with Delphinium Turquoise and Witch's Potion Purple Lindy's Starburst Sprays along with a little water. By tipping the mixed media paper in several directions, runs and drips were created. Old text paper was torn and adhered to the background with gel medium. Once dry, Mermaid Lagoon, peacock Feathers, and Chipped Sapphire Distress Crayons were applied over the text, the edges of the background, and a few other places where I wanted to emphasize or alter the colour. They were spread with a wet finger. A TH text stamp was rolled onto the background here and there using Jet Black Archival as was one of the circles from Stampotique's Circle Cube. White embossing paste was scraped through TCW's Tiny Circles stencil to add texture. 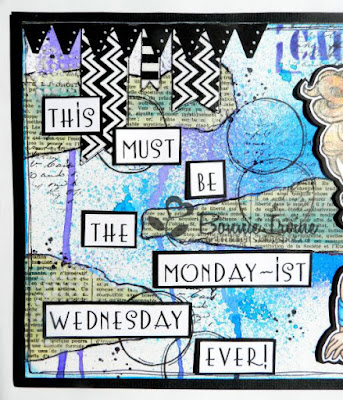 Black and white washi tape was applied to white cardstock and added to the top left and right side. Outlining and a doodled border was added with black pen. To go along with the saying, the word Caution was added with Deep Purple Archival Ink through an Andy Skinner Industrial Elements stencil. The sentiment was computer generated and printed onto white cardstock. The words were cut apart, matted with black cardstock, and popped up on foam tape. Bunting was cut from black Cardstock and dotted with white paint pen before being adhered at the top left. To balance that, two black enamel dots were added to the lower right corner. Black Big Brush Pen edged the background before it was matted with black to frame the page.


Thanks for stopping by today. I appreciate that so much. To see what my talented TEW teamies have created with this same image, be sure and stop by The East Wind Challenge blog. We would love to have you play along with our Something Old, Something New Challenge.

Stunning as always Bonnie. Your coloring combination is fabulous and the saying is hilarious. I feel that way today. Lol. I just love love love everything you create.