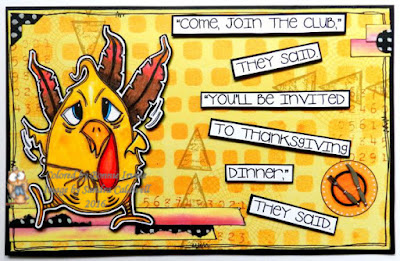 Hi everyone! This is my second post this morning and my second new release from Sandra Caldwell of Babycakes Digis and Designs. This time I created an art journal page inspired by this hilarious image called 1172 Turkey Chick. I love the "chick" images which Sandra creates and always imagine stories to accompany them. For this one, I imagine a bunch of turkeys convincing her to join their wonderful club with the turkey costume as part of her uniform. They were hoping that she would be chosen for Thanksgiving dinner instead of one of them :) 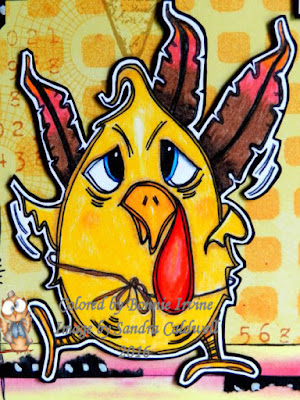 I coloured Turkey Chick with a mix of Prismacolor and Polychromos pencils. She was fussy cut leaving my usual white border and then matted with black card stock to make sure she stood out from the background. Foam tape was used to pop her up and adhere her to the background. 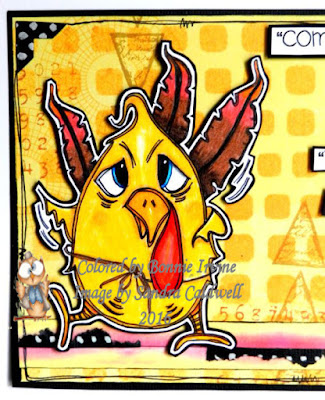 The 6 x 8 inch mixed media background was spritzed with California Poppy Gold and Yellow Rose of Texas Lindy's Starburst sprays. Marigold Yellow Orange Starburst Spray was spritzed through Joggles Twaddle stencil and allowed to dry. Two Viva Las Vegas background stamps were applied to the background with Yellow Ochre Archival Ink before pieces of washi tape which had been adhered to white card stock were  added in two places. Small scraps of Texture Paste  accented black cardstock were added to the washi tape on the left. A circle was punched from the same paper and added to the washi on the right. A third element, a punched corner, was placed in the upper left corner to complete the visual triangle. 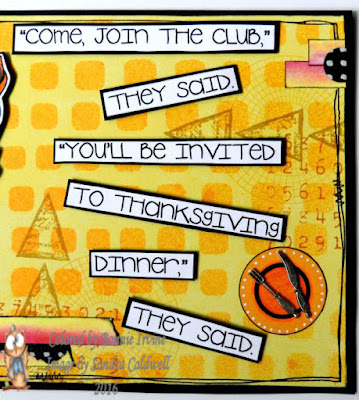 The sentiment was printed on white card stock, cut into sections, and matted with black. Foam tape was used to adhere these segments to the background. A dinner plate was cut and decorated from orange card stock and a small knife and fork were adhered over the plate to give Turkey Chick a not- so-subtle hint to head for the hills. A border was doodled around the page and the edges were inked with black Big Brush pen before a black mat was added to frame the page.

Thanks for joining Turkey Chick and me today. We appreciate that. Her advice for you is that if any turkeys come around to recruit you into their club, Just Say No! LOL To see the rest of the fabulous new images from Sandra, be sure and pop by the Sandra Caldwell Stamp Fans Facebook group where our talented DT will be posting their makes throughout the day. Be sure to pop over to Sandra's Etsy shop, Babycakes Digis and Designs, to browse through all of her awesome images. You are sure to smile and to find inspiration and Must-Haves there. I know I always do!