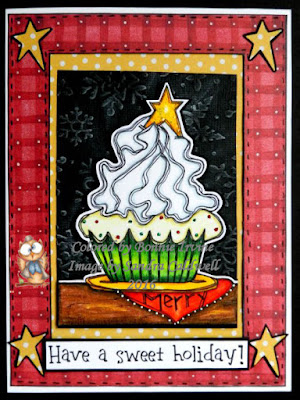 Hi everyone. This is my second post for today and I am sharing my second card created with my second New Release image from Sandra Caldwell. That's a lot of seconds...LOL. I hope you didn't do that at Thanksgiving dinner :) Today is another New Release Monday at Sandra Caldwell's Etsy shop, Babycakes Digis and Designs and that means a lovely collection of new images posted to the shop and wonderful DT projects on Sandra's Facebook group featuring those stamps. This week I was lucky enough to be able to play with two images. The one I am featuring in this post is called 1206 Whip Cream Christmas. Yum! 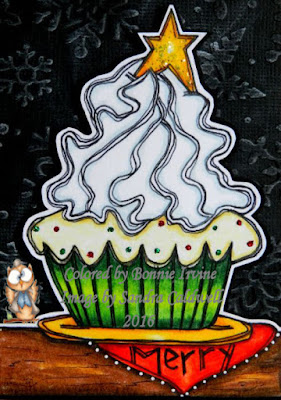 The image was coloured with a mix of Prismacolor and Polychromos pencils. Black pen was used to create the grain of the wood, and white paint pen created the white dots on the napkin. The dots on the cupcake icing were made with Red and Green Stickles which catch the light. Icicle Stickles were added to the star on top for more sparkle. The image was fussy cut leaving a narrow white border and once again I matted it with black and fussy cut again, not knowing that I was putting black behind the image. Foam tape was used to pop the image up. 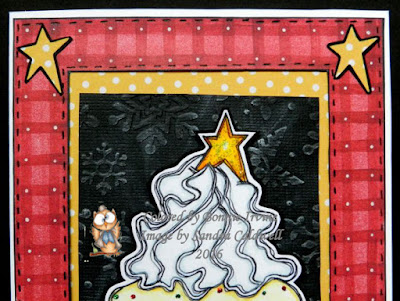 I created this card in a similar fashion to my earlier card only this time there is no black mat around the frame. I cut a frame from red checked pattern paper slightly smaller than the white card base so that 1/8 inch of white would peek out. The frame was faux stitched on both the inside and outside edges with a black pen. A rectangle of yellow dotty paper was cut slightly larger than the frame opening and adhered to the back of the frame before both parts were adhered to the white base. A rectangle of black card stock big enough to fit the image was cut and embossed with a snowflake folder. The flakes were dry brushed with white acrylic paint to highlight the raised areas before being adhered to the yellow paper. The image then went on top. 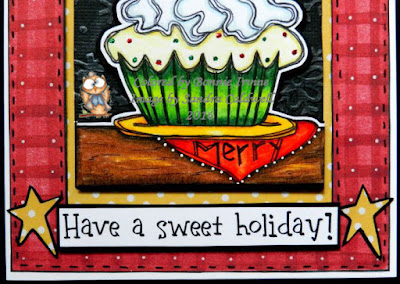 The sentiment was printed onto white card stock, matted with black, and popped up with foam tape. It was placed where the frame and the inset piece meet along the bottom to bridge the two. Stars were punched from the same yellow dotty paper and matted with black card stock. They were then adhered in each of the four corners.

Thanks for stopping by today. I hope I didn't make you too hungry with this whipped cream topped cupcake.To see the rest of this week's fabulous new images from Sandra, be sure and pop by the Sandra Caldwell Stamp Fans Facebook group where our talented DT will be posting their makes throughout the day.  Steal some time to stop by Sandra's Etsy shop, Babycakes Digis and Designs, to browse through all of her awesome images. You are sure to smile and to find inspiration and Must-Haves there. I know I always do!

Life is good; so is art.
Bonnie
Posted by Bonnie Irvine at 07:05