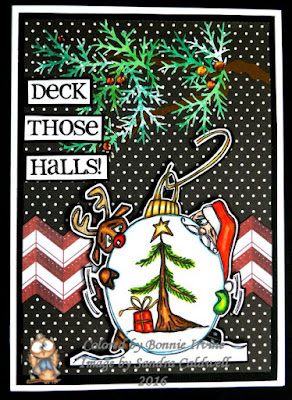 Hi everyone! It's New Release Monday at Sandra Caldwell's Etsy shop, Babycakes Digis and Designs. On Mondays, Sandra's DT members post projects created featuring many of the new images both on their personal blogs and on the Sandra Caldwell Stamps Fans Facebook group. Today, I have a Christmas card featuring a newbie called 1196 Reindeer Games. 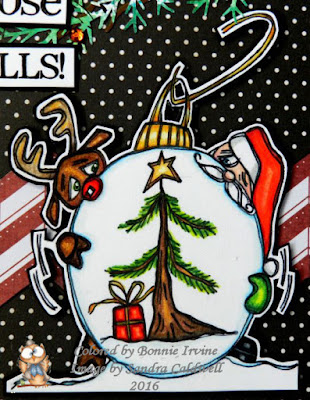 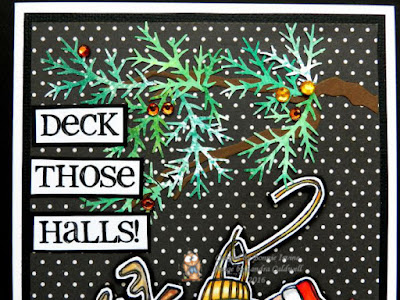 A black mat slightly smaller than the 5 x 7 white card base was adhered to the front. A rectangle of black and white dotty designer paper cut slightly smaller than the black mat was adhered over that. A zig zag pattern was cut from another designer paper to form a horizontal band which was adhered behind where the image would go. Because I thought it looked like Santa and Rudolph were trying to raise the ornament to hang, I created a tree branch with a die cut and greenery with a punch to give them somewhere to aim for. Small amber coloured rhinestones were also adhered to the bough. The sentiment, which seemed to summarize the orders issued by Mrs. Claus, was printed on white card stock and the words were cut apart. They were matted with black card stock and adhered flat to the card.

Thanks for visiting Santa, Rudolph, and me today. We all love that! When you get a chance, be sure to pop by both Sandra's Facebook group where the fabulous DT projects will be displayed, and also Sandra's Etsy shop. Not only will these images be posted later today but there is a plethora of other fabulous images there which are sure to catch your fancy. It's a wonderful place to browse and get inspired.