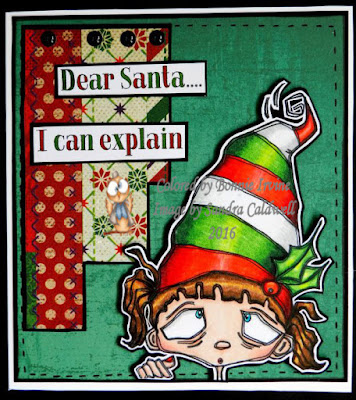 Hi everyone. Today I have two new releases from Sandra Caldwell because she very kindly gave us last Monday (Halloween) off. The first one I am sharing is this adorable one called 1128 Grandma's Little Elf. I absolutely adore the look on her face so I chose to create a Christmas card with her. I coloured her with a mix of Prismacolor and Polychromos pencils. She was then fussy cut leaving a narrow white border. Once she was adhered to black card stock, she was fussy cut again leaving a narrow black border. I like how the white and black frame the image and help it contrast with the background. I also like the fact that Sandra's signature linework becomes wider and therefore stronger with each border added. I don't want to lose those skinny bits because they are an integral part of Sandra's style and design. Foam tape was added to the back of the image to pop it up and create a natural shadow. 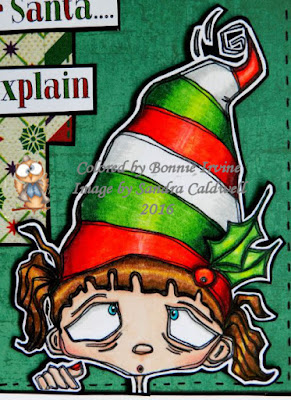 I kept the background simple on this one which I often do on a card to allow the image to take center stage. The card base was white so a rectangle of designer paper was cut to fit inside the base leaving a white border and enough room to mat the green with black card stock. Another piece of designer paper was trimmed out to emphasize the strips of pattern and make an interesting staggered shape. This was also matted with black before it was adhered to the upper left corner of the card. Four black enamel dots were adhered across the top. 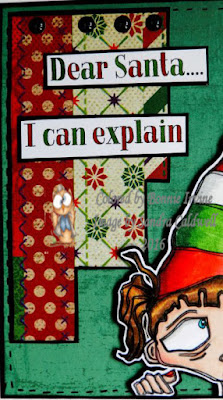 The sentiment was printed onto white card stock and then every other letter was coloured in red or green using fine markers. The sentiment was cut into two segments which were each matted with black to make them pop. Faux stitching was doodled around the outside edge of the green background and black Big Brush pen was used to edge it and hide the white edge of the designer paper.

Thanks for joining Grandma's Little Elf and me today. We are delighted you did that. She will be available in Sandra Caldwell's Etsy shop, Babycakes DND, later on today. While you are there, check out the many other fabulous images which she has. I always find lots of Must-Haves and look forward to my Monday visits there. We would love to see your Sandra Caldwell creations posted in our Sandra Caldwell Stamp Fans Facebook page. If you tune in later today, all of the other awesome  DT makes with the new releases for this week will be posted there for all of us to enjoy :)