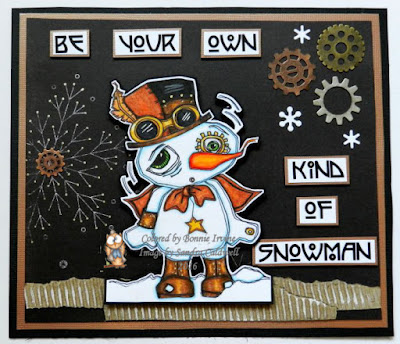 Hi everyone! I am a huge fan of steampunk. I love the mix of industrial and fantasy, the contrasts between the hard and the soft, and the creativity and appeal to my imagination. Today's new release by Sandra Caldwell at Babycakes Digis and Designs held instant attraction for me because it combined steampunk with a snowman, another fave of mine. Put those two things with Sandra's fabulous and unique style and this image called 1176 Snow Steampunk was irresistible! 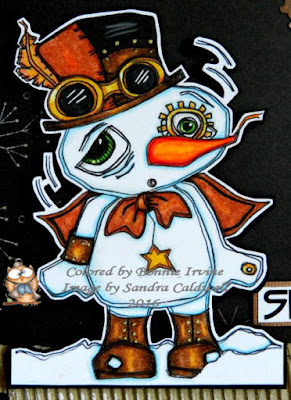 I coloured Snow Steampunk with a mix of Prismacolor and Polychromos pencils, keeping my palette neutral...kind of rusty and industrial. As much as I like bright colours, the Steampunk colour palettes are one of the things I really love about the genre. Snow was fussy cut leaving a narrow white border, matted with black card stock, and fussy cut again leaving a narrow black border. He was them popped up on foam dots. 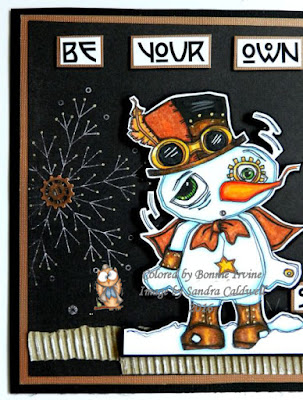 I wanted a black background but also wanted to include snowflakes. Luckily, I found the perfect designer paper from Heidi Swapp so I measured out a 6 x 7 inch rectangle, allowing the large snowflake to "drift" off the page. In order to create Steampunk snowbanks, sections were torn from the inside of a corrugated coffee sleeve and then overlapped when they were adhered. White gesso was scuffed onto the corrugated areas using a finger. Metal gears were adhered in the top right corner as well as in the center of the large snowflake. Other flakes die cut from white card stock were adhered next to the gears in the sky. 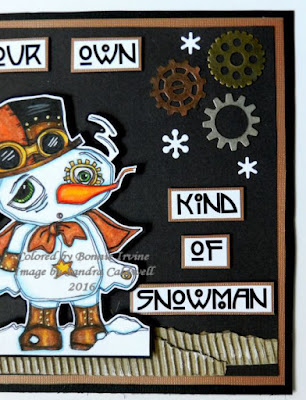 The sentiment was printed onto white card stock and then cut into individual words. These were matted with metallic bronze toned paper and then popped up on foam tape. Gold gel pen was used to fill in the small circles in the font. The same paper was used to mat the black background and then another mat of black was adhered behind that to create a double frame. Although the camera didn't capture it, the bronze matting has a dull sheen and quite a bit of texture.

Thanks for popping by today. Snow Steampunk and I appreciate that. To see the rest of this week's fabulous new images from Sandra, be sure and pop by the Sandra Caldwell Stamp Fans Facebook group where our talented DT will be posting their makes throughout the day.  Steal some time to stop by Sandra's Etsy shop, Babycakes Digis and Designs, to browse through all of her awesome images. You are sure to smile and to find inspiration and Must-Haves there. I know I always do! She is also sponsoring a fun 12 Days of Christmas contest over on the Markers!Papers! Digis! Facebook group. It's been lots of fun and we are only on Day 6 :)