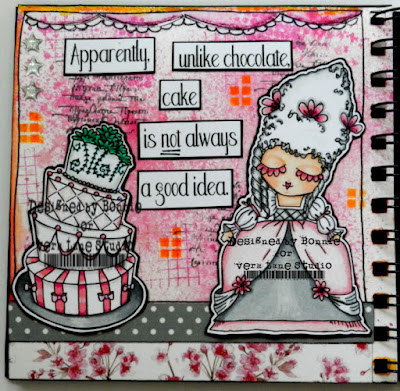 Hi everyone! There was an awesome new digi set released by Vera Lane Studio yesterday. It's called Marie and is the cutest version I have ever seen. I chose to use the Marie with her eyes closed because she is really trying to puzzle out what's so wrong with cake! 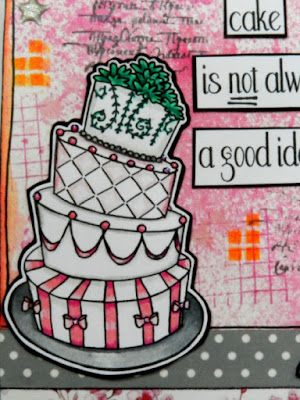 The 6x6 inch watercolour paper background was spritzed with Lindy's Cotton Candy Pink and Hottie Patottie Hot Pink Starburst Sprays. Once dry, stamping was added with Magenta Hue and a VLV grid stamp, with Watering Can Archival and an Indigo Blu Tasty Textures Stamp, and with another stamp from the same set and the Magenta Hue. Stencilling was added with Tiger Lily Archival Ink and BAM stencil 1027. The same ink was added to the outside edges because some overspray from the previous page was already on one edge so I wanted to tie it in. 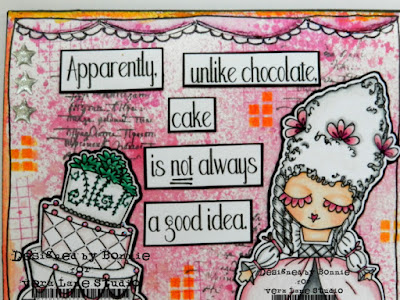 The scalloped border at the top of the page was a partial rub-on from my stash which I finished with black Pitt Pen and coloured in with white Posca Paint pen. It was shaded above the line with Inktense pencil activated with water. The wording was printed onto white cardstock, cut into sections, and matted with black. Three silver glittery stars were added to the top left corner to pull some of that gray from the bottom of the page into the top. 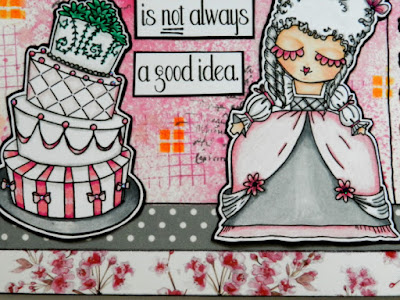 To give Marie somewhere to stand, two washi tapes were layered at the bottom of the page. Black pen was used to outline them and to create a border around three sides of the page. The edges of the page were inked with black Big Brush Pen to add the finishing detail.

Thanks for visiting Marie and me today. I hope you learn from her and opt for chocolate instead of cake today. While you are snacking, be sure to pop by the Vera Lane Studio Etsy shop and our Facebook page. Both are grplaces to get inspiration!