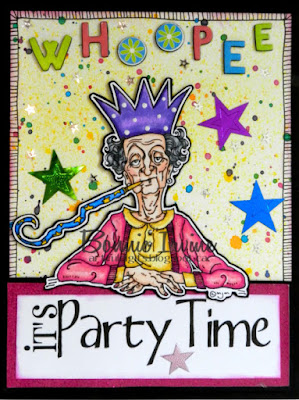 Hi everyone! It's Week 42 of the Joggles Art Journal Adventure and, in honour of my b-day yesterday and everyone else who has or will have a birthday this year, the prompt is Celebrate. The prompt is not limited to birthdays but anything that can be celebrated like reaching a milestone or goal or even the everyday. I have birthdays on my mind so that's where I went with this prompt using a Mo Manning (Mo's Digital Pencil) image called Whoopee to star on this art journal page. She cracks me up, looking as thrilled as she does...LOL. 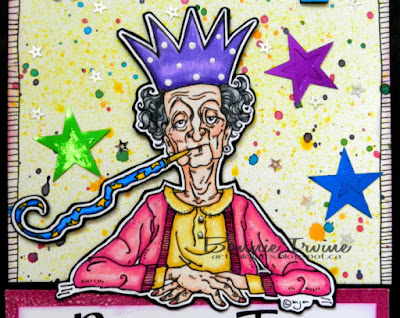 I coloured her using Prismacolor and Polychromos pencils, adding gesso dots to her hat and flat back pearls for her shirt buttons. She was then fussy cut leaving a narrow white border, matting with black, and fussy cutting a second time leaving a narrow black border. Foam tape was added to the back to add dimension when she was adhered to the background. 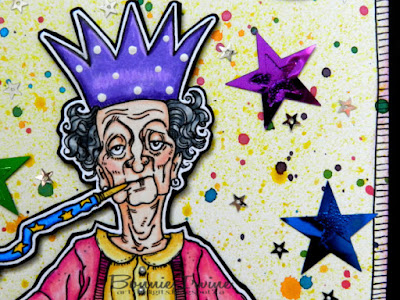 The 6x8 inch mixed media paper background was spritzed with Lindy's Yellow Rose of Texas and California Poppy Gold Starburst Sprays were added to the background, allowing lots of splattery dots to dry as well. To make the background look like confetti was being thrown, several other colours of Lindy's were added by flicking the pick up tube over the page. The colours used were Hottie Pattotie Hot Pink, Bachelor Button Blue, Freaky Frankenlime, and Witch's Potion Purple. Large shiny metallic stars and tiny silver stars were added to the mix to make it look more festive and create some shine. 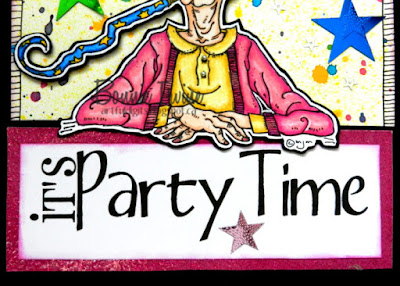 The wording at the bottom comes from a Create With TLC download which was matted with sparkly pink paper. A smaller pink metallic star was added to tie it to the background. Thanks for popping by today to celebrate with us today. We appreciate that. It's not too late to join the Joggles Art Journal Adventure group. It's an awesome place to hang out!