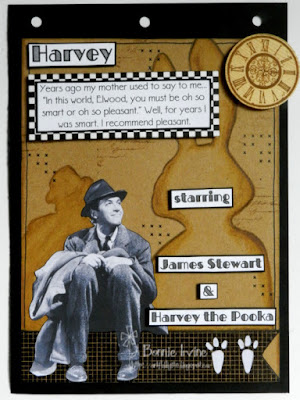 Hi everyone! The prompt for Week 40 of the Joggles Art Journal Adventure is to create something inspired by a movie.  I spent a  while considering which movie I would choose because there are so many that would be fun to use as a springboard for a journal page...so many that I have watched over and over again. In the end, I decided to go with a classic which is on my all time favourite list but which many people have never seen. The movie is a classic called Harvey, released in December of 1950...even before my time....LOL. It stars Jimmy Stewart as Elwood P. Dowd whose sister is trying to have him committed because he hangs out with a 6 foot 3.5 inch invisible rabbit named Harvey. Harvey is a Pooka, a Celtic fairy spirit. Not only is the movie funny but it also tugs at my heartstrings and I love the message. 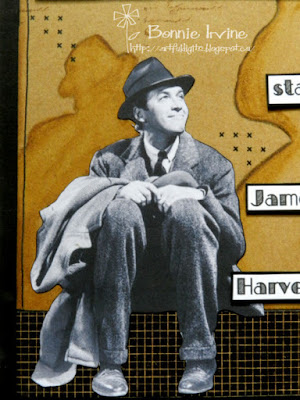 I decided to recreate an art journal page similar to one of the original movie posters. An image of Jimmy Stewart sittin on the curb chatting with Harvey was printed and fussy cut. I just love the look on his face. Elwood P. Dowd is such a gentle soul who loves his friend...and people in general...so much. I have used kraft and black washi tape cut into a flag shape to serve as my curb. Two rabbit footprints were drawn onto gray paper and fussy cut so they could be adhered to the flag end of the washi. 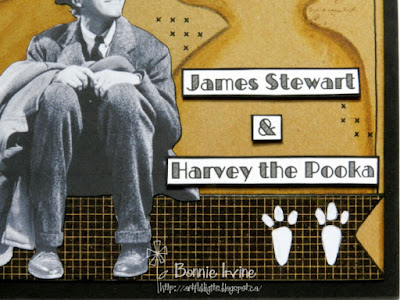 The background used was a 6x8 inch rectangle of kraft cardstock because I wanted a vintage feel to the page and a subtle backdrop. Harvey's outline was sketched in with pencil and then shaded inside with Inktense pencil activated with a waterbrush to create a shadow (since he's invisible). Elwood was given a shadow by first tracing around the top and left of the fussy cut image which had been shifted up and to the left slightly. This was shaded the same way as Harvey's shadow and then Elwood was glued in place overlapping the shadow. Text was stamped onto the bare areas with Coffee Archival and tiny x markings were added with black Pitt Pen. 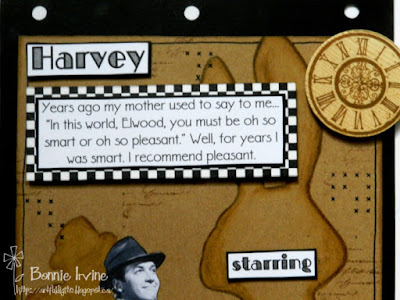 The wording is a quote from the movie which was printed onto white cardstock. matted with black, and then matted a second time with washi tape adhered to white cardstock. There are some fabulous lines in the movie and I wanted to feature one of my favourites. The other wording was created in the same way, omitting the washi tape border. All were adhered using foam tape to add dimension and natural shadow. To finish the page, a simple border was doodled with black pen and the edges of the page were inked with Coffee Archival. A wooden clock was added to the top right corner as a reference to Harvey's ability to alter time, an example of which you see at the end of the movie.

Thanks for joining Elwood, Harvey and me today. We are so glad you did. Be sure to check out what the other members of our Joggles Art Journal Adventure Facebook group create in response to this Movie prompt. I can hardly wait! They are such a creative and talented bunch!