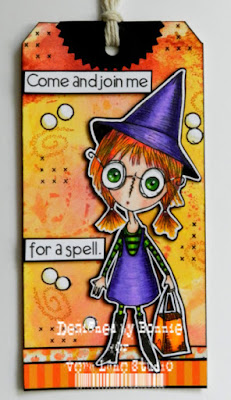 Hi everyone! For my second DT project for Vera Lane Studio, I created a Halloween tag featuring one of my favourite witches. Her name is Stella Luna and she was created by Vera Lane Studio. I think she is adorable...definitely a good witch :)

I coloured her with a mix of Prismacolor and Polychromos pencils, fussy cut her leaving a narrow white border, and matted her with black. She was popped up on foam tape to create dimension and natural shadow. 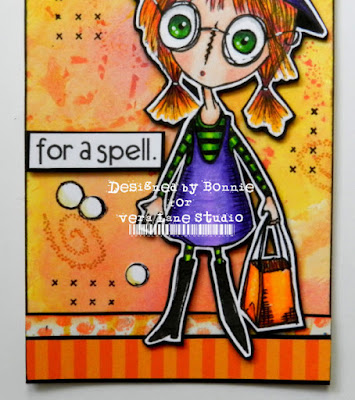 The background was one I had started ages ago and just recently found in my stash. I believe it was coloured with Distress Inks but I would be guessing at the colours. It was done with the wrinkle free technique where the ink is smushed on the craft sheet and spritzed with water. The colour is then adde to the tag by dipping it into the puddles of ink. The bottom of the tag was layered with a bit of left over gel print and a strip of patterned paper both matted with black cardstock to help the layers stand out. A spiral stamp was added in a few places using Rusty Hinge Distress Ink. Tiny Xs were added with black pen through a stencil. 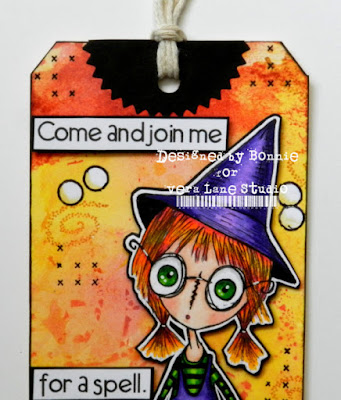 Thanks for joining Stella and me today. We are so glad you did. Have you seen the new stamps Janet Klein created in the Vera Lane Studio style for AALL & Create? They are fabulous and I can't wait until mine arrive. People have been sharing their makes with them on the Vera Lane Studio Facebook group...such awesome images and creations. So now you have a choice of rubber or digi. My rubber ones were ordered from Topflight Stamps and,of course, the digis are available in the Vera Lane Studio Etsy shop.

Life is good; so is art.
Bonnie
Posted by Bonnie Irvine at 08:30