AWNB Step Into My Parlour 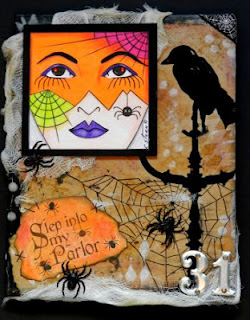 Chris Stern and the DT at Art With No Boundaries have switched formats to a monthly challenge instead of a fortnight challenge. We will still be bringing you weekly inspiration projects to encourage you to play along so tune in each Monday to see what's new...and for this month, spook-tacular. We are dedicating an entire month to October and Halloween. For October, think of Fall Colors, Rustling Leaves, and Big Orange Pumpkins and for Halloween, Black Cats, Outrageous Costumes, anything Spooky or Haunted, Ghosts, Goblins, Ghouls  or even something dark and Gothic.

I chose to play with the Solitaire Mask of Webs image from CS Designs for my first project. I coloured her using Prismacolor pencils and a little OMS for blending. I love her purple lips. For Webster's eyes That's what I named her), red rhinestones create the highlight, whereas the spider dangling from her mask has white half pearl eyes. Webster was matted in black and popped up on dimensionals awaiting her background. 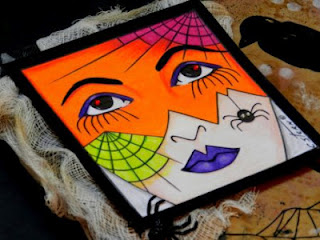 For the background, an 8"x10" canvas was altered. It was first painted with black gesso before a torn piece of kraft paper decorated with a flocked raven and candlestick was crumpled up and gel-mediumed down. Then out came the stencils, acrylic paint, inks, and other art journalling bits to create grunge, texture, and dimension to the background. When it was sufficiently messy,  pieces of cheesecloth meant to resemble spiders' webs were adhered to the canvas. 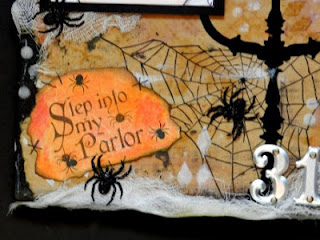 The sentiment, also from CS Designs, was printed on a scrap of Halloween patterned paper, torn on the edges and inked. Neocolor II crayons were added to the sentiment and the background at this point. Glittery spiders, web-patterned ribbon, and TH metal numbers were adhered to the canvas to tell the rest of the story. I wonder where Webster's other spider friends have gone? Bwaaa-haaa-haaa-haaa. (Evil laugh)

For more spooky inspiration, be sure to visit Art With No Boundaries to see the rest of the DT projects. We are so happy to have a special Guest Designer for the month of October. Lyn (aka BlackDragon) Brough is lending her talents to us on both blogs. You'll be amazed by her projects and those of  my other teamies.

Thanks for dropping by. I look forward to returning the favour when you link up to our challenge.

Life is good; so is art.
Bonnie
Posted by Bonnie Irvine at 10:32

Hi Bonnie
I love the texture on the background your use of cheesecloth the brightly coloured image and I just want to say No Thanks!!!. I will not be stepping into your parlour scaaary!!!!

Love how you popped Webster out with those bright colors and the background is phenomenal. You evil laugh adds just the right touch ;-)

Bonnie, This is just so fantastic, and everything you have added to it just screams spooky cool. I loved reading all the things you did to make this canvas what it is and it has given me so many great ideas for future projects. Also loved the evil laugh. Thank you for the inspiration, now I want purple lips too.
:) Chris / CS Designs

I love Webster's purple lips, too! She is so vibrant. Wonderful background - the cheesecloth works perfectly!

It amazes me that someone would dare to step into this black widow's parlor...lol! It's like the voice that says "Get Out!", and yet the people stay...lol! You do the very best coloration...really! She's gorgeous and all the scariness is fabulous! Love it!

Fabulous ! Love how you have coloured this fantastic image, lots of lovely scary details on this fab and funky piece,

Just spook-tacular---all your background elements play well together with your focal element.

This is stunning. I love your usage of color and you accessories are perfect and wonderful. sentiment the bonus.
susan s.