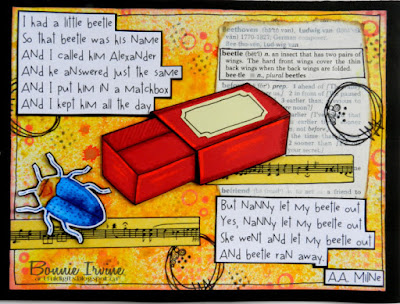 Hi everyone! It's Monday which means it's time for the next prompt in the Joggles Art Journal Adventure. For Week 30, the prompt is Bugs. Now this might mean the ones outside that sometimes fascinate and other times annoy or we might want to feature something that bugs us, completely unrelated to those insect types. The choice is ours to make. I always love to see where people's imaginations take them. 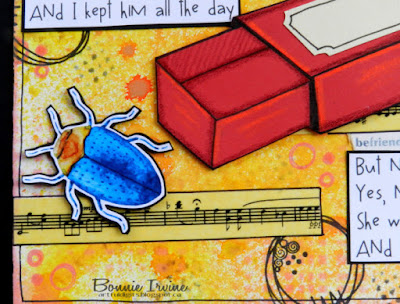 When I was in high school, back in the days of yore, one of my favourite music albums was by an artist called Melanie (Safka). She had the most whimsical music and an awesome style and I played that music over and over again (think of the song "Brand New Key" or "Look what they've done to my song, Ma"). I can still sing those songs, still remember all the words...just ask my husband. I have been known to randomly bust one out at any given moment :) Anyway, on that album was a song called Alexander Beetle, based upon a poem by one of my favourite authors, A. A. Milne. This became the inspiration for today's journal page. 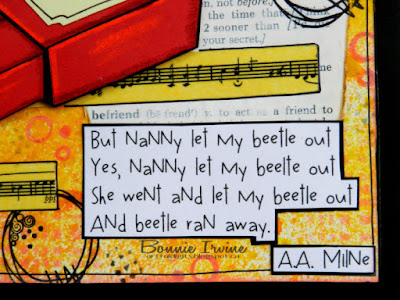 The background started with Lindy's Marigold Yellow Orange, Yellow Rose of Texas, and California Poppy Gold Starburst Sprays being spritzed on mixed media paper. Once dry, Worn Lipstick Distress Oxide Ink was applied through TCW Plaid Fringe stencil in several places as well as around the edges of the page. The same ink was used to add some stamped circles here and there. Jet Black Archival Ink was added through Carabelle Studio Weft Fabric and Numbers stencil. 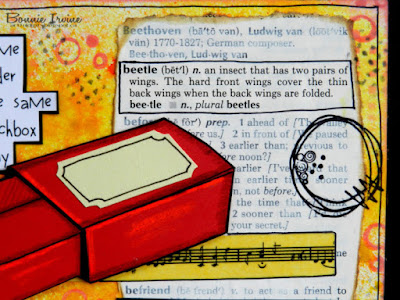 A section containing the definition of beetle was torn from a children's dictionary, and all but that definition was gessoed over to push it back. The main definition was outlined with black pen and the edges were inked with Coffee Archival Ink before the section was adhered to the background.One of the Paper Artsy Tracy Scott stamps was inked with Jet Black Archival and applied to the background in a visual triangle. 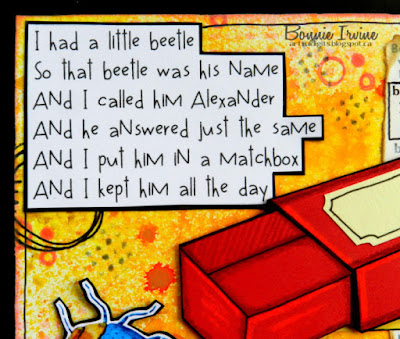 The words to the song/poem were printed onto white cardstock, divided into two sections, and matted with black to draw attention to them and help them stand out against the background. 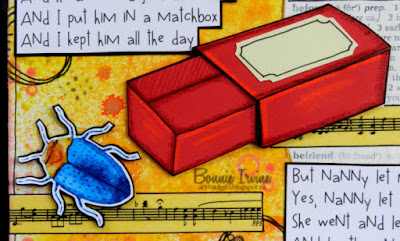 Alexander was fussy cut from the Joggles Watercolor Beetles I Collage Sheet. The matchbox was drawn onto red cardstock using a reference photo from Pinterest. It was shaded and highlighted with coloured pencils and lined with black Pitt Pen. A label was cut from cream paper for the top. Two sections of music themed washi tape were added to give Alexander and the matchbox a place to stand as well as giving a nod to Melanie's song. To finish the page, a simple border was doodled and the edges were inked with Black Big Brush Pen before the page was adhered to the black background.

Thanks for joining Alexander and me today before he disappeared...darn that nanny! To see where the other participants in the Joggles Art Journal Adventure Facebook group go with this prompt, be sure to pop over throughout the week. We would love to have you join us and play along.