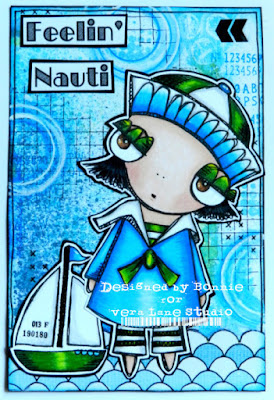 Hi everyone! For the July swap in the Vera Lane Studio Facebook group, Carole has decided we will trade postcards with a summer theme. I have never traded postcards before so I'm extra excited to play along this time. The postcards can either be 4x6 inches (which I chose) or 3.5x5 inches and must feature a Vera Lane Studio image. 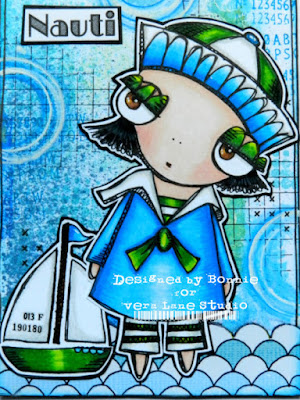 I decided to have The Sailor and her sailboat star on my postcard. I love her sweet face and little sailor suit. I coloured them with a mix of Prismacolor and Polychromos pencils. Both images were fussy cut leaving my usual white border, matted with black cardstock, and fussy cut again leaving a narrow black border. Some tiny TH number rub-ons were added to the one sail of the boat. 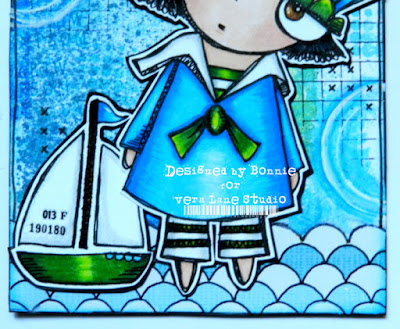 The background began as a larger gel print created with shades of blue and green acrylic paints. Additional texture was added with a number stamp from Studio Light, and a dotty stamp from Indigo Blu using Manganese Blue Archival Ink. A grid stamp by Studio Light was added with Jet Black Archival Ink. Tiny Xs were scattered in a few clusters using a black pen and an Alexandra Renke stencil. To create the wave pattern at the bottom of the card, a scrap of scallop printed designer paper was fussy cut and, once glued in place, was outlined with black pen. White Gesso was applied with an empty tape roll to make the double circles. Inktense pencil activated and applied with a waterbrush helped the circles stand out. 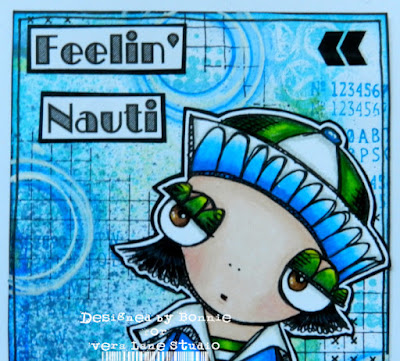 The punny wording was printed onto white cardstock, cut apart, and matted with black cardstock. The edges of the card were inked with Manganese Blue Archival Ink, and edged with Black Big Brush Pen. A simple doodled border was added as well as a small chevron rub-on was placed in the upper right corner.

Thanks for popping by to visit with The Sailor and me. We appreciate that.  Be sure to stop by the VLS Facebook group to see the other swap postcards as they are posted in the album there. We would love it if you joined in. Check out the Vera Lane Studio Etsy shop as well. There are wonderful new sets and collage sheets added all the time! Oh, the possibilities!